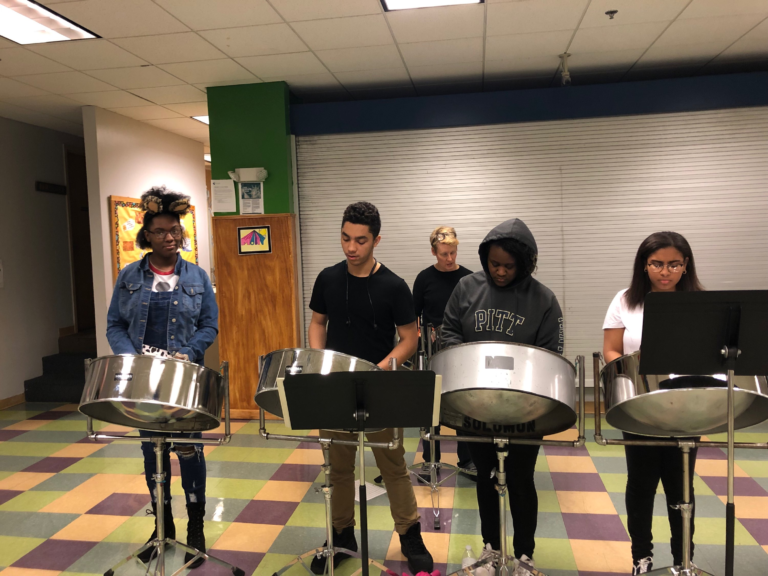 What are the Sounds of Steel? Participants in this year’s Pittsburgh Cultural Trust Gallery Crawl had an opportunity to find out during the popular annual event on Friday, April 26, 2019.

Students have been playing Caribbean-themed music as part of our school’s Steelpan Program since 2000. While performing well-known tunes such as “Under the Sea,” “Baby Shark,” or “Beautiful,” the Sounds of Steel group has put a spotlight on one of our school’s most successful educational programs.

That fact was evident as the Sounds of Steel played to a wide audience on April 26 as part of the Pittsburgh Cultural Trust Gallery Crawl, a free event that featured 21 stops across 14 blocks throughout the Cultural District. The talented students were a hit during the multi-venue showcase of downtown Pittsburgh’s dynamic art and entertainment scene.

In addition to the steelpan performance, our middle school and high school students read poetry and spoken word performances during the Gallery Crawl.

Performing under the guidance of world-renown instructor Miss Tracey Wharton, our steelpan students have appeared at community events such as:

Steelpans, also known as steel drums or pans, are musical instruments originating from Trinidad and Tobago. Steelpan musicians are called pannists and our students have carried on the musical tradition.

Thanks to our school’s location in the heart of Pittsburgh’s Cultural District, we’re proud to be able to give our students the opportunity to put their hard work and creativity on display for our local community members to enjoy at events like these.