Skip to the content
Mrs. Homich says: Keaon Chapman-Robinson has been a favorite student of mine ever since he was in my final mentor group as a young freshman. That was a challenging group to be in socially, with strong personalities on every side of the room. After that year, I went into administration, but I always made it a point to check in with them as they grew into sophomores, then juniors, then seniors. In his junior year, Keaon made the decision to take my Advanced Placement English class. This was a challenging group to be in academically, with brilliant minds on every side of the room. I have to say that in that mentor group, and in that English class, Keaon never let himself be overshadowed. He has always been outspoken and brave when it comes to speaking his mind. In fact, on last year’s AP Exam he outscored almost everyone in the class. And now, in his senior year, Keaon again chose to challenge himself with AP English. He has gotten better and better every year I have had the pleasure to teach him. This year, Zoom class has been a challenge, with many students being too timid to put themselves out there. Despite silence from many of his classmates, Keaon has been outspoken, inquisitive and funny. His group’s project satirizing anime featured him as the most dramatic and memorable character. I could always count on him to respond and to help move the class forward, and that says everything you need to know about him as a student and as a person. I know that Keaon Chapman-Robinson has a great future in front of him, and I can’t wait to see how he makes all of his future organizations better with his unique style and courageous character. 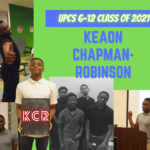