Skip to the content
Mr. Claggett says:
We were fortunate enough to have Rayla come to us last year from the Pittsburgh Public Schools. Rayla came to us and was very quiet, but at the same time, a very observant student. I made her acquaintance in the lunchroom. Rayla was very guarded at first, but began to settle in comfortably after a few jokes between me and her about her former school. That comfort level became evident, as I began to receive frequent visits from Rayla on an almost daily basis. The myriad of questions I would almost receive on a daily basis, generally ranged from, “What you doin, I thought you had a meeting?” to, “What we eatin’ today, you bring me something in?”. Oftentimes I knew her penchant to build upon our relationship would come at the cost of missing the current class she was in, so I would personally call over to that class, and ask if they knew she was missing from their classroom due to Rayla not having a hall pass. Rayla would emphatically state she was done with her work, and would at times, after being made to go back to class, come back and show me her work as if to be so appalled , that I didn’t believe her. I would just shake my head and laugh when she would boisterously return to my office with work in hand stating,” Do you believe me now, do you believe me now?”, purposely putting the work in my face and then turning to leave, acting as if she was disgusted and upset because I cut the conversation short in the first place. A good, and often humorous personality is one of the many characteristics Rayla possesses. Continue to make people smile and remain sincere and you will go far in life.
Rayla, it was a joy to have you come through our doors, and it’s very unfortunate, we were not able to spend the last couple of months conventionally. I know there were some things in the second half of the year you were dealing with, but you persevered, and would show up daily to school. The quick pop-ins to either make me laugh, or get on my nerves, will truly be missed. I wish you the best of luck on your endeavor into adulthood. 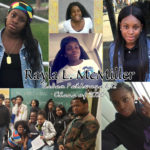 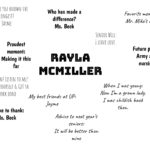 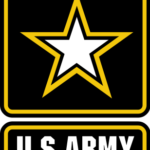